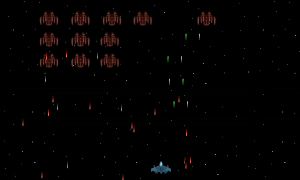 In this series of tutorials, I will be covering how to write an HTML5 game similar to the 1979 arcade game Galaxian from the ground up. There will be 5 installments in this series, each one will cover one part or aspect of the game. It will cover everything from setting up the game to web optimization in coding. I’ll link each new tutorial as I finish them here so they can all be in one location.

Coming into this tutorial, I knew I wanted a few ground rules set that would make it a worthwhile endeavor. Because of this, I set goals for myself as to how I wanted the tutorial to turn out.